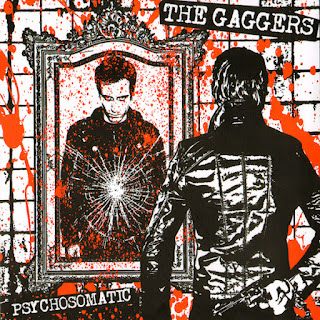 Holy crap, did it really take me a year to finally write about the almighty Gaggers?! Shame! Better late than never, I suppose. If we're talking the greatest punk rock bands walking the Earth today, The Gaggers are top five at least and making a frantic push for #1. And for sure they've got to be the best band to come out of England in...well...a long fucking time! If you played a Gaggers record for someone, you could easily pass it off as some forgotten gem of punk greatness from the first wave. With most bands you can tell that they're newer groups emulating the sounds of long ago. Not so with The Gaggers. They are 110 percent the real deal. I haven't heard a new punk band sound this delightfully raw and fantastically snotty since The Prostitutes first set fire to my eardrums back in the mid-'90s. High praise for sure, and this band more than merits it. Any time people talk Gaggers, certain references pop up. Pagans. Jabbers. Dead Boys. Germs. I don't disagree, but The Gaggers don't sound like they're copying those bands. They sound far more like a band that could have existed alongside those groups 35 years ago. Their guitar sound is filthy and ferocious. Their lyrics are nasty and uncouth. They play with destructive abandon, yet their songs are catchy as hell. And if you like "snotty" vocals, these guys have the best out there right now. When these blokes say they play "in your face, spit in their arse punk rock", they're not kidding!

Already on its second pressing (the first sold out in a day!), new single "Psychosomatic" is the first Gaggers release to feature their new-and-improved four piece lineup. The title cut just might blow your head off! In my book, it's an instant classic. Think Registrators' Terminal Boredom meets Stitches' 8 x 12. You Killed By Death geeks are gonna go bananas! On the flip, "Can't Control My Eyes" is another snot-rocket set to explode in your face. Prepare yourself!

Why is this record selling like hotcakes? Uh, because it's freaking awesome! If you don't like this, you're either half-dead or a closet Nickelback fan. Bring on that new LP!

Hey man, indeed a GREAT band and I go with you in everything you mention here except for this minor detail:

"the best band to come out of England in...well...a long fucking time!"

I guess you forgot about Johnny Throttle, right?!