Food of the Year: The Contenders 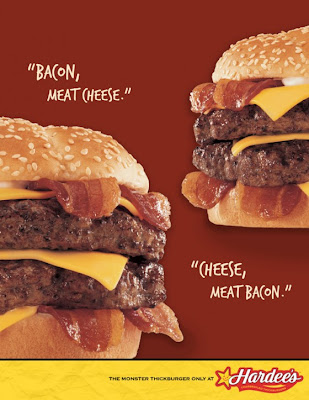 By popular demand (actually just the singular suggestion of Dr. Shawn Abnoxious), I am publicly announcing the nominees for this year’s Faster and Louder Food of the Year Award. The victor, along with all the rest of the 2011 Faster and Louder Award winners, will be declared at a black-tie event to be held New Year’s Eve at a top secret location. Many of the following food items have already been mentioned in this very blog space. Some have not. Pay attention. You may be quizzed on this material at a later date.
The nominees:
Tony Packo’s hot dog ()
Steak N’ Shake double steakburger
The Slice of Heaven sub at The Deli of Italy () (Sicilian salami, capocollo, prosciutto, fresh mozzarella)
Hardee’s Original Thickburger combo
The Original Philly cheesesteak at Philadelphia Steaks & Hoagies ()
I had originally nominated the gyros at Gyro X-Press in , but upon further review the fifth and final nomination must go to Hardee’s. First of all, Hardee’s has by far the best fast food French fries going (McDonald’s be damned!). And the 1/3 pound Thickburger – made from angus beef – is up there with the Wendy’s double at the very top of its class. Hardee’s, once a declining power in the fast food world, has made itself over in recent years by emphasizing quality at a slightly higher price point than its competitors. Driven by my latest numerical imperative, 350 (the objective is to deadlift 350 pounds, without straps, by the end of the year), I have been visiting Hardee’s on an average of twice a week in pursuit of extreme nutritional fortification. I recommend that you do the same.
Other honors to be handed out at the 2011 Faster and Louder Awards may include:
Album of the Year
Song of the Year
Beer of the Year
The Championship Belt (awarded to the reigning Greatest Band on Earth)
Album of the Year Masters Class (only bands formed prior to 1986 are eligible)
Best New Band
The rick Bateman Prize for Excellence in Music Criticism
Least Sucky Mainstream Hit Single
The Faster and Louder Lifetime Achievement Award
Tickets for this first annual extravaganza will soon be available from your local purveyors of Polish sausage, craft beer, plus-sized pornographic films, and strongman training equipment. Andy Dick is tentatively signed on to host. The Mongrolls will be playing songs from their new album and debuting their two new members who were recently smuggled into via row boat. ESPN 4 will have the live broadcast. Stay tuned!
- L.R.
Posted by Lord Rutledge at 3:48 PM

Im so there. In one hand one of those Hardees burgers, in tne other Hudy Amber... Such a special ocassion tnat im gonna have beer WITH food, which is rare for me.

Screw the Emmys, Grammys and Oscars! This is THE award show I'm looking forward to watching. I'd love to have a poster of that Hardee's ad. Right now, though, I'd rather have the burger.

The sandwich on the poster, the Monster Thickburger, is quite a handful. I did take one down a couple weeks back, but from now on the regular thickburger will do!