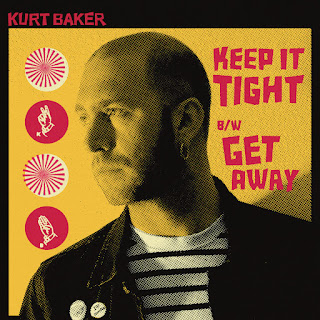 Can you believe it has already been ten months since Kurt Baker released his most recent album After Party? Time flies when you're waiting for a pandemic to end! "Keep It Tight", Baker's new single on Wicked Cool Records, will be his first physical release since After Party. Due to a worldwide delay in the manufacturing of vinyl, the actual record won't be available until November. But the digital version and vinyl pre-order went live a couple of days ago. For this release, Baker has served up a real treat to power pop fans. "Keep It Tight" and "Get Away" feature the same lineup from After Party: Baker, Wyatt Funderburk, Geoff Palmer, Kris Rodgers, and Craig Sala. Both of these songs are covers of what you might call "forgotten classics" of 1980s power pop. The former was a minor hit for Virginia-based new wave band Single Bullet Theory - peaking at #78 on the Billboard Hot 100 in March of 1983. The latter appeared on Julian Leal's 1985 self-titled debut album -- a self-released cult classic of Midwestern power pop. "Get Away"'s major claim to fame is that it was featured on American Bandstand's Rate-a-Record segment in January of 1988. Baker has done a great service in bringing attention to a couple of buried treasures from the world of power pop. Just as importantly, he and his bandmates have done fantastic versions of both songs that are both faithful to the originals and imbued with the spirit of Baker's original songs. Those backing vocals are massive, and Rodgers kills it on the keyboards! If you loved After Party, "Keep It Tight" will make an essential companion piece.
-L.R.
https://kurtbakerwcr.bandcamp.com/album/keep-it-tight
https://www.facebook.com/KurtBakerMusic
https://www.instagram.com/kurtmiltonbaker/
https://wickedcoolrecords.bandcamp.com/
https://www.facebook.com/WickedCoolRecords
Posted by Lord Rutledge at 2:05 PM