The Decibels - Scene, Not Herd 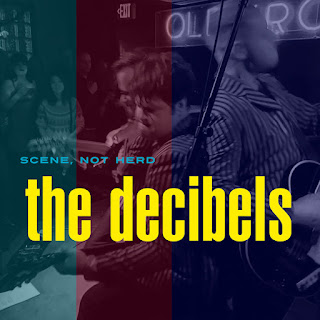 It gives me immense pleasure to report that it's 2019 and The Decibels still sound like...The Decibels! This Sacramento foursome was one of the first "new" power pop groups I ever got into back in the '90s. The band's 1997 debut album Create Action! remains my favorite non major label power pop album of the '90s. I dug through my archives to see if I still had a copy of the review I wrote 21 years ago. Sadly, I do not. That's probably for the better since I find everything I wrote in my 20s cringe-worthy. Heck, I even find things I wrote in my early 40s cringe-worthy! Suffice it to say, I owe my love of power pop partially to The Decibels. And after a taking a long break from 2003-2017, this band is back and sounding great!

The Decibels have two recent albums out on Screaming Apple Records with plans for a new 8-song release this year and another album album next year. Scene, Not Herd is the latest LP - the band's first album of original songs since 2003. As expected, it's a power pop fan's delight. These guys haven't changed much from their mod power pop by way of the British Invasion beginnings. The formula remains very much the same: ringing melodies, punchy guitars, and classic '60s inspired pop songwriting. But what I appreciate is that they've made the kind of record you would expect from an older, wiser version of The Decibels. A lot of the lyrics are reflective of the wisdom we gain as we become proper adults and discover what's truly important in life ("And I wish that I could cancel/Due to lack of interest/All the things I thought of aloud" is one of my favorite lines of recent memory). I doubt the 1997 version of this band could have written a song like "Hey Emily" - which is tender and heartbreaking, yet ultimately full of hope. If anything, The Decibels have become even greater students of power pop and its musical origins. Over the course of this album, you'll hear the influence of everyone from the early Who to The Beatles ("Misery") to The Byrds to classic power pop bands like Shoes and The Nerves. "Stupidity" reminds me a little of Material Issue, which you know is positive in my book! If you were concerned that Dean, Joe, Brent, and Brian might have lost some of that old magic after a decade and a half apart, you will be happy to discover that they've picked right up where they left off. The band's melodies remain exquisite, and there's not a single dud among these 12 tracks.

The Decibels recently created a Bandcamp account to share their music with old fans and hopefully plenty of new ones as well. If you're a longtime Decibels fan, you should be thrilled to sink your teeth into Scene, Not Herd and its companion piece Big Hits (plus 12 more!) - a collection of covers that gives you a glimpse at the band's musical inspirations. And if you've lost your old copies of Create Action! and The Big Sounds of The Decibels, you can purchase digital versions of those as well! The Decibels will be heading up to Seattle this coming Friday May 24th to play with my pals The Cheap Cassettes. Be there or be square!