Amyl and The Sniffers - self titled 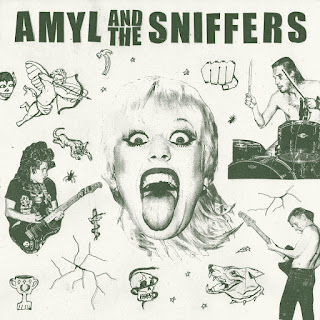 I know some of you may be alienated by the hype over Amyl and The Sniffers. But I've never been one to blame a band for its press clippings. And I've certainly never held success against any band. I wish the same thing for every group I write about: the opportunity to sell a lot of records and play shows to large, appreciative crowds. If a band from our world can "make it", more power to 'em! It's not like Amyl and The Sniffers made some sort of calculated stab at mainstream recognition. I mean, come on: worshipping at the altar of the Cosmic Psychos, sharpie rock, and Aussie murder punk would be one of the least likely paths for a band gunning for the big time! Whatever bizarre circumstances led such a band to Dave Matthews' record label, Gucci campaigns, and mega features in NME will by no means dissuade me from enjoying its music. And if esteemed colleagues of mine like Mick Fletcher and Alex Kish are touting a band, that's a wagon I want to be riding!

The way I approach Amyl and The Sniffers' debut album is to put any hype or expectations completely out of mind. Based entirely on its own merits, it's an exciting and tremendously enjoyable blend of punk and hard rock in the storied Aussie tradition. Clearly this is a far less raw-sounding version of Amyl and The Sniffers. Yet a more "produced" sound actually beefs up the band's attack. Producer Ross Orton really seems to understand what this band is all about. He elicits a tougher, more powerful sound that really plays up the Sniffers' love for '70s rock riffs. Just listen to how much harder the album version of "Cup Of Destiny" hits compared to last year's single (which I also loved)! And given the elapsed years between the recording of this album and the previous EP Big Attraction, it's no surprise that the band shows considerable growth on this release. "GFY" is raging, pissed-off punk rock at its finest. It's the perfect song to crank loud in the car as you vent your frustrations after a shit day. In a similar spirit, the pummeling "Gacked On Anger" is a veritable anthem for a generation of young people who are underemployed, broke, and at their wits' end. The aptly-titled "Punisha" is a swift kick in the teeth, NWOBHM style. On the other end of the spectrum, it's hard to imagine the Amyl and The Sniffers of two years ago being able to pull off songs as overtly "pop" as "Angel" and "Got You". And "Shake Ya" is the kind of sing-along hard rockin' anthem that I've been dying to hear on the mainstream airwaves for the past 25 years!

Having been such a big fan of the more straight-forward '77 style punk of Big Attraction, I did question whether I'd be as enthusiastic about the direction the band was taking with this album. But I have to say I like this record a lot. Inspired quite obviously by multiple generations of Aussie bands, the Sniffers combine punk and hard rock in a way that feels totally natural. I suppose Amy Taylor's vocals are something you either love or hate. For me, they will always be the very best thing about this band. Everything else flows out of her charisma, sass, and sheer force of personality. I don't think it would be possible for Amyl and The Sniffers to be anything other than a punk band. They certainly have not gone mainstream. The mainstream has come to them. In the meantime, they'll just keep on tearing the roof off of every pub, club, and basement venue that will have them. This really is one hell of a band. Let's enjoy them.

great review of a great album josh. if anyone's interested in a bit of background info on the life of a successful punk band i can post a few bits from chats i've had with the bassist's dad....

"Mick the new album is out on May the 24th I think ,it was recorded just before christmas in Sheffield with Arctic Monkeys producer.Rough trade apparently are stoked with it .The tour has gone amazingly .Played texas at sw festival then gigs from Vancouver down to San Diego and vegas,Absolutly smashed it selling out all over.Playing seven in the uk just brighton to go sold out all but leeds I think.over to brussels. Amsterdam then Denmark, Sweden then four in Germany one festival in france and one in Holland then back to OZ for three then back to London for east meets west I think it is,then Helsinki ,Switzerland and istanbull also a gig in Halifax before heading back to the US"

" they are definitely on the charge, they just announced two shows in Melbourne and Sydney in a month, a few hours ago and the Melbourne show had over 800 hits in a few hours probably be sold out tomorrow.Rough Trade are absolutely stoked a lot going on in the next month they play Hamburg tonight and Copenhagen tomorrow then Stockholm before a day off I think then Berlin.Gus was picked up in London and driven over to paris by Gucci in the middle of the tour for filming .The artistic director of Gucci loves punk .Gus and Amy were both on the catwalk in milan a few weeks ago.They have not a bean yet from the band and live hand to mouth so this sort of money has been a life saver."

"Hey Mick the Amyls new album out .Seems like the uk, should say the world loves it , you lot have great taste.Managed to get on the cover of NME for what that's worth nowadays although any sort of publicity helps."

"spoke to Gus the other day they only got back to Australia about three weeks ago from the US did two sold out shows in Melbourne and one in Sydney.Then back all over Europe some big festivals all over I think twelve countries 43 gigs this time the us and Canada are loving it as well.They love England the most .Gus told me he wrote the song go fuck yourself .proud of my boy"

"can't wait to be back in the uk in August pity I think the Amyls might be in Japan .Just seen a photo of a tower records shop in Japan with a massive display ,should kick off there. I think they will be there later on in the year they wanted to do the Fuji festival but it clashed with the US leg in july I believe ,the band want to go and also to New Zealand lots of interest from the south sea poms"