Back To Basics - Shaded Eyes EP 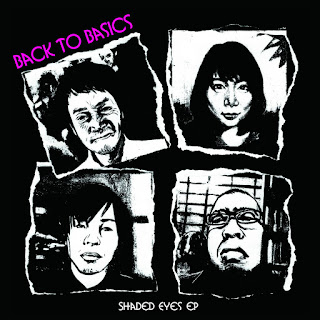 Secret Mission Records continues to bring the finest in Japanese punk rock to American shores! Back To Basics have been around for a decade. They have two singles and an album to their credit - all of it released only in Japan. Shaded Eyes EP is their third 7" and quite possibly their "punkest". This band features Shintaro from First Alert and Tomoaki from Louder in its lineup, so you probably know what to expect. This release isn't quite as trashy or frenzied as some of the SMR titles, but it still has that high energy Japanese garage punk feel along with a touch of pop. "Shaded Eyes" is clearly the punker on this EP. It's jumpy and upbeat with some jerky rhythms and very excited vocals. If this track doesn't have you pogoing around your room, I will be very surprised! On the flip, "But Not Indifferent" is more on the power pop side but still punchy as hell. It's really typical of the brand of power pop that comes out of Japan - new wave influenced, with guitars and bass going crazy. Reminds me a little of The Tweezers or (obviously!) First Alert.

With Back To Basics having emerged as one of the top punk/powerpop bands in Japan, it's wonderful that the band's music is finally available in the States. I wholeheartedly recommended the Shaded Eyes EP to fans of Japanese garage punk and just great catchy punk in general. Vinyl is still available from the Secret Mission Bandcamp!