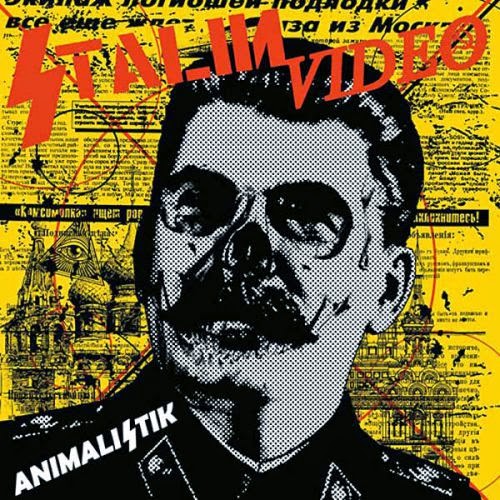 If you described Stalin Video as The Gaggers meet Now in 3D, you'd be literally correct. The trans-Atlantic super-group Stalin Video features members of these two recently defunct bands joining forces and merging their signature sounds. Animalistik is the band's debut album, and it's a Grade A ripper. Throw the snotty punk rock of The Gaggers into a blender with the scuzzy synth-punk of Now In 3D. Toss in a lyrical obsession with murder, torture, and large scale brainwashing. The resulting concoction is hard to swallow yet nothing short of extraordinary. What else would you expect from a band with a genocidal authoritarian dictator for a mascot?

Don't let the synths and robot man backing vocals fool you. Animalistik is not some brooding post-punk art piece. It's a punk rock record all the way - and a crackling one at that. Imagine The Screamers on a dystopian sci-fi bender, covering an entire volume of Killed By Death. The lyrical vision is deeply disturbing, yet fantastically open to interpretation. Is this a glimpse at a nightmarish future, or are we already there? It's chilling to envision killer dogs roaming the streets and evil doctors experimenting on live subjects. And "My Face On Your Head" is a mind fuck I'm still struggling to process. Yet songs like "Animalistik Journalist" and "Suspekt" seem more topical than speculative - reminders that the human horror show is already well in progress. Terminal Gagger, reborn here as Vinny Stalin, spits out every gruesome detail with a fury bordering on delirium. And musically, Stalin Video is the best of the two worlds its unites: fast and frantic, with a whole lot of electro creepiness bubbling under. This may seem like an odd choice of words, but this is a thrilling record. These songs have a way of compelling you to sing along - which is a total blast until you realize what's coming out of your mouth. I'll never look at a Lincoln Continental the same way again.

Animalistik is that rare punk rock album that manages to be different yet completely great. I have to admit I'm usually lukewarm on synth-punk. But to me, this record would not have worked without the synths. The precise combination of influences that makes up Stalin Video has yielded something truly special. And so far, it's definitely the punk rock record of the year. If you're bummed that The Gaggers are no more, the dark offerings of Animalistik ought to lift your spirits. Get it from Wanda Records!