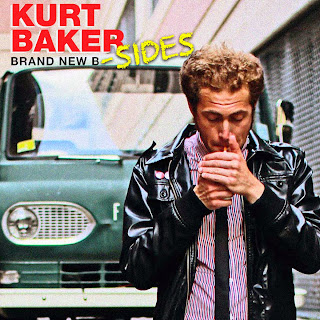 You may recall that my Album of the Year for 2012 was Kurt Baker's Brand New Beat. I would still probably list Brand New Beat as my favorite album of the 2010s so far. I haven't stopped listening to it in a year and a half! What you might not know is that when Baker got together with producer/pal Wyatt Funderburk to write and record Brand New Beat, they actually came up with enough material to fill two albums! The idea was to only use the best songs for the album and save the rest for singles and overseas bonus tracks. Baker and Funderburk - two of my favorite songwriters in the world - clearly knew what they were doing. But just because the track selection for Brand New Beat was flawless doesn't mean that the outtakes weren't terrific in their own right. And so now we get to hear all of them on Brand New B-Sides - available now on Bandcamp and due out on CD next month on Rum Bar Records! If you didn't know these songs were leftovers (no pun intended), you'd probably think, "Wow, Kurt Baker just put out another awesome record!"

As expected, Brand New B-Sides brings the same vibe as Brand New Beat. It's a fun pop/rock n' roll record brimming with positive energy and radio worthy hooks. Truthfully, any of these songs could have been on Brand New Beat. There's no garbage in this collection. Baker and Funderburk surely had to make some tough decisions in leaving gems like "Emma Stone" and "Quit Dancing With My Girl" off the album. But no worries - having such amazing songs in reserve allows Baker and Funderburk to tide us fans over while they work on a follow-up to Brand New Beat! The songs here hit all the usual reference points for a Kurt Baker record - with echoes of Elvis Costello (the loungey "Since You've Been On My Mind"), Thin Lizzy ("On The Run"), and even Butch Walker ("Lost In Translation"). There are also a couple of pleasant surprises in the Motown flavored shaker "Think It Over" and the near epic "City Lights" - which allows Baker to imbue late '80s synth and drum machine sounds with his special flair for pop melody. Throw in covers of Nick Lowe's "So It Goes" (given an arena rock makeover!) and Sylvain Sylvain's classic solo track "What's That Got To Do With Rock N' Roll?", and you've got yourself a damn fine album!

Alright, Kurt Baker fans! It's been a while since we've heard new material from Mr. Baker - and surely his next album will be a year or two in the making. But while you wait, dig into the special treat that is Brand New B-Sides. When even your "rejected" material is this good, that is true talent. Most bands/artists in the power pop world wish their best album was of this caliber! If I wanted to get the melody to "Emma Stone" out of my head, I'd probably have to consult a brain surgeon. Straight up, Kurt Baker is the king of power pop. Brand New B-Sides, like everything else in his catalog, is an essential purchase.