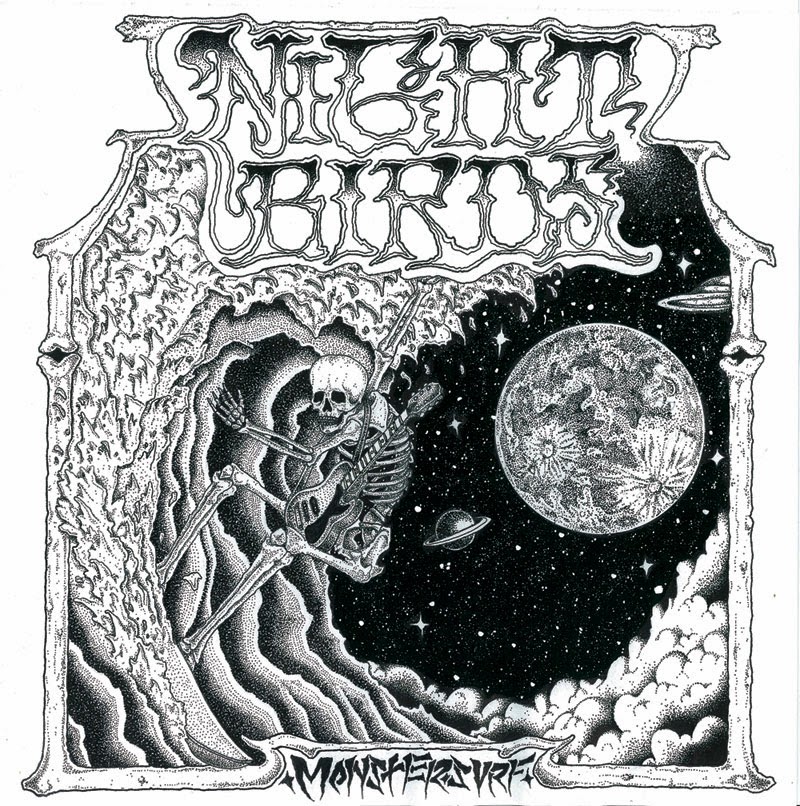 Today Night Birds join the short list of bands that have been featured five times on this blog. This entitles them to quite the array of prizes - including a complete set of F & L beach towels, a case of WWE ice cream bars, two dozen collectable golden medallions bearing the images of various Fastbacks drummers, and a year's supply of puffy shirts. And while their entry into this exclusive five-timers club indicates that they've been putting out a healthy amount of music in recent years, to me it's more about the quality of their output. At no point have Night Birds settled for repeats of previous releases. They're always pushing themselves to be more awesome. With every new record, they offer something new or different or unexpected. New EP Monster Surf totally fits that description. If you're a fan, you're sure to love it. But in no way has the band done a record quite like this before.

The idea behind Monster Surf is genius. Since Night Birds have always included surf instrumentals on their records and in their live set, wouldn't it be kind of cool if they did an entire EP of nothing but surf instrumentals? Absolutely! So here it is - out on Wallride Records. And it does not disappoint! One thing I've always admired about Night Birds is that their instrumentals are something to look forward to. They're not "filler". When you hear them do an instrumental track, your reaction isn't "I wish this song had vocals." It's more along the lines of "This freaking rules!" Perhaps the only concern you could have about this EP is that it seems a waste to have one of punk rock's greatest front men riding the pine. But while Brian does step away from the microphone on this release, he moves over to synthesizer duties and really adds something cool to the mix. Joe and P.J. have worked up three original instrumentals along with a killer arrangement of "Hope For The Best (Expect The Worst)" from the classic Mel Brooks film The 12 Chairs. Listening to this EP, I'm really struck by Night Birds' chemistry and musical skill. P.J. tears it up on guitar, and that rhythm section gets to show off chops that are sometimes obscured by the sheer velocity of the band's "regular" attack. And the addition of horns is a neat touch. I've never been surfing, but "Pyongyang Bound" makes me feel like I actually have. I can practically smell the ocean. "Agent Zero", on the other hand, has me picturing Snake Plissken surfing a tsunami in Escape From L.A. "Hope For The Best (Expect The Worst)" is immediately recognizable, yet somehow these guys make it sound like it was written to be a surf song! Hopefully this record will inspire a few people to check out The 12 Chairs - one of Brooks' best and most underrated films. If Night Birds ever did a full album of Mel Brooks covers, I'd buy that in a heartbeat. I bet they could knock "Springtime For Hitler" out of the park.

Whether you're a hardcore Night Birds fan (pun fully intended) or just a lover of surf rock in general, Monster Surf is a mandatory purchase. And if for whatever reason you're morally opposed to instrumentals, you'll be happy to hear that Night Birds are writing new material and preparing to invade Europe this summer. Don't these guys ever rest?!