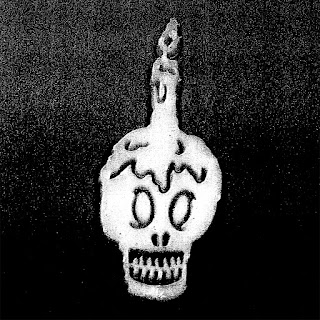 So leave it to me to not review Cold Warps' Halloween single until Christmastime! No matter: like any Cold Warps record, "Don't Haunt Me, OK?" is going to sound great 365 days a year. Look up "pop" in the dictionary, and you just might be directed to this Canadian foursome's Bandcamp page. Once again they've mined the middle ground between the Beach Boys and Ramones. And once again, they've demonstrated that you don't need fancy production when you can write perfect songs. Perhaps the tunes pack a little more punch this time out, but the recording is far from hi-fi. The ghostly title track is a tad creepy but mostly funny, and of course it's pop gold. B-side cut "Stuck On An Island" may be even better. It's classic Cold Warps: lo-fi power pop evoking the fuzzy-scuzzy side of beach bliss. I don't think garage-pop could get any catchier without the written consent of the Center for Disease Control. Given the brilliance of this band's previous output, you might wonder if A) this release is up to the group's usual standards and B) it's necessary to buy yet another Cold Warps record that's so stylistically similar to the others. Surely you know me by now. My answer to both questions is obviously going to be yes. Cold Warps are one of the best bands on the planet. Everything they release is essential. If you're a pop person like me, it's a great time to be alive.