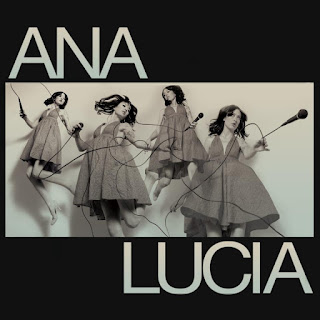 Well! How's this for ending the year in style? Ana Lucia - lead singer of the late, great Busy Signals - has made her first solo album. And our old friend Travis Ramin is her producer/collaborator/bandmate extraordinaire! Needless to say, it sounds unbeatable on paper. Everything Travis Ramin touches turns to gold, and no doubt the Busy Signals were one of the very finest punk bands of the mid-2000s. You have to own this, right? Is The Pope Catholic? Do I like beer? The sales pitch promises a blend of Dangerhouse Records style punk rock and new wave power pop, and that turns out to be remarkably accurate. Recorded at Geza X's Satellite Park Studios by the legendary Paul Roessler (45 Grave, The Screamers), this album boasts enough star power to make the Los Angeles Angels envious. And it does not disappoint. Ana Lucia's got a rich, powerful voice, and in many ways she's a throwback to the classic punk/new wave frontwomen of yore. If anyone's got the attitude and pipes to pull off this Blondie meets The Bags type deal, it is she.

A la her work with the Busy Signals, Ana Lucia's solo debut is the good kind of pop-punk. The songs pack a mean punch, and the hooks are massive. A couple tracks (like the sublime leadoff smash "Mad Man") are typical of a Travis Ramin production. But for the most part, this record is more hard candy than bubblegum. Songs like "Take Take Take" and "Hush Hush" are near perfect specimens of buzzsaw punk infused with tasty pop melodies - and lord knows I have a great weakness for that sort of thing. Across the board, the material is top-notch. "Mess Around" may be the best song Debbie Harry never wrote, and even the spooky "Watcher" (featuring Roessler guesting on keyboards) is hugely infectious. Plus all you punk historian geeks will really appreciate inspired renditions of Sado-Nation's "Gimme You" and The Zips' "Take Me Down"!

With Ramin and Matt Castore (The Pinsch, Condominium) ably backing her, Ana Lucia has delivered an album that ought to make her a star. It sounds as fresh and appealing today as it would have in 1980. Not only is Travis Ramin a genius producer, but he always manages to work with the most talented singers out there. Ana Lucia is certainly in that category. You can stream "Mad Man" over at the Ramo Records Facebook page, and I highly encourage you to do so immediately! I guarantee you'll love it. Vinyl is out on Ramo, and the CD is available from Base Records out of Tokyo. Get excited!

http://www.facebook.com/ramorecordsmusic
Posted by Lord Rutledge at 6:50 AM