All hail the Crusaders Of Love! 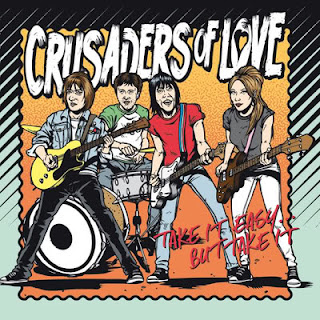 There are few things in life better than "classic" power pop. It's a recipe that you don't have to mess with. Just write great songs with killer hooks, and no one's gonna care that your style is unoriginal (well, some people will care, but they don't like good music in the first place). Cut out of the same cloth as previous Euro power pop sensations The Yum Yums and The Cheeks, France's Crusaders Of Love take on the tried-and-true '79 style and sprinkle in a touch of Exploding Hearts worship (nothing wrong with that at all!). Out on FDH Records, Take It Easy...But Take It is the band's second LP. And it's a dandy! With a sound recalling both power pop's forefathers (like Paul Collins) and its modern day masters (like Gentleman Jesse), the Crusaders Of Love were bound to win me over. I'm a sucker for power pop by-the-book! But there are a couple of things I especially like about this band. One is that they don't neglect the "power" component of the power pop formula. Take It Easy doesn't skimp on loud, punchy guitars, and the muscular production evidences the band's garage/rock n' roll roots. Just as importantly, I really feel these songs. It's nice to hear someone sing about heartbreak and actually sound heartbroken. Although I'd generally describe this as a "fun" album, many of the standout tracks have melancholic overtones (love, after all, is not for the faint of heart). The band name is not deceiving - these Frenchies really know how to craft a good love song! For my money, "It All Ends That Way" and "Ready To Show Our Love" are the "hits". But the album is truly solid the whole way through. Covering all angles from the Exploding Hearts echoes of "Off The Street" to the wistful '60s-inspired jangle of "Next Summer" to the rock candy crunch of "Lonely City", Take It Easy hits the sweet spot and never grows stale. It's the kind of record that might fly under the radar a little, lost in the shuffle of punk/garage/power pop overload. But when the year is over and the dust settles, you just can't deny it a spot in your top ten. Don't sleep on this one, kids!