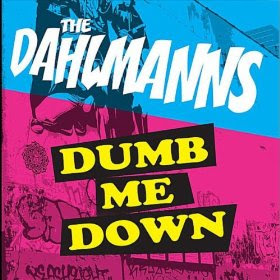 The Dahlmanns, I believe, are the first band to be reviewed three times on F & L. They should probably get some kind of award for this. I'm thinking maybe a large trophy or perhaps matching motorcycle jackets. How about a year's supply of premium bubblegum imported from the good old U.S.A.? I don't know - I'll have to consider the matter further. Dumb Me Down is the band's third CD EP on Pop Detective Records - the fine label run by my fellow native Pennsylvanian Mark Hershberger. If you're a hardcore Dahlmaniac, you probably already know the songs "Dumb Me Down" and "Go Getter" from the split 7" with Nikki Corvette. But if you're not, or you don't own a turntable, your ship has come in! The title track was written by Francis MacDonald (BMX Bandits, Eugenius, Teenage Fanclub). It's the latest in a long line of great covers by these Norwegian pop sensations, and it's a little different from the band's usual "if the Ramones each had a child with Blondie" pop/punk sound. Think more along the lines of the best Liz Phair song you ever heard. It's a great little pop song that once again affirms this band's considerable interpretative powers. Line's voice is in fine form, and the playing and production should serve as a model for any band that aspires to make this type of music. "Go Getter", on the other hand, is classic Dahlmanns - and one of the band's best songs yet! A la Nikki and the Corvettes, it's high energy power pop with a fun, rockin' feel. Oooh, I love this one! It's upbeat, catchy, and truly impossible to not love. The lyrics make me smile. Why in the world is it not a massive, multi million-selling hit? I really wish I knew.

The "bonus material" on this release consists of acoustic indie-pop versions of two Dahlmanns favorites - "I Want You Around" and "This Time". Sometimes with power pop bands, something crucial is lost when they go the "unplugged" route. But with The Dahlmanns, the stripped down approach accentuates just how talented they are in terms of their writing, vocals, and musicianship. If anything, the twee pop vibe makes Line's voice sound even prettier! Sure, I think we'd all like to hear some brand new material, but no doubt that's coming down the pike soon enough. And in the meantime, Dumb Me Down is a must-have whether you're a huge fan of the band or just a connoisseur of great guitar pop. It's one of the year's best EPs, but that goes without saying. It's the freaking Dahlmanns, man!

Yeah, this is great stuff.