Nick Piunti - "All This Time" 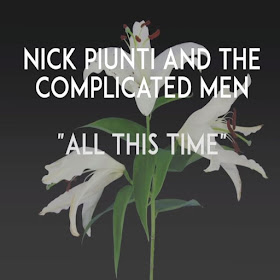 Nick Piunti has been one power pop's shining stars in recent years. He has released four albums since 2013 - all of them absolutely brilliant. He's got another one in the works for 2020, which will be his first with his band The Complicated Men. Out now on Jem Records, new single "All This Time" is a little sneak preview of the forthcoming full-length. The Complicated Men are Jeff Hupp (bass), Ron Vensko (drums), Kevin Darnall (keyboards), and special guest Ryan Allen (guitar, harmony vocals). Given that Piunti is so well-known for the substance and smarts of his lyrics, it's appropriate that he and the band have released a lyric video for "All This Time". There are few things more powerful than songs lamenting lost love, and I gotta say this one really cuts deep. "You got a lot of nerve to say I'm overserved," sings Piunti. "It's not the drink that did me in, can't find no comfort in my skin." If I said those lines sounded Westerberg-ian, well I certainly wouldn't be the first person to make the comparison! This is just a devastating postmortem on a relationship, building up to the powerful refrain "All I wanna do is wake up without you on my mind". Musically this one is right in Piunti's "power pop for grownups" wheelhouse. And with a terrific band backing him, he sounds in top form. So give "All This Time" a listen (and a look!). The new album is slated for release early in the new year and will include ten songs. And if you need to get caught up on all the previous albums, now is a great time to do it!