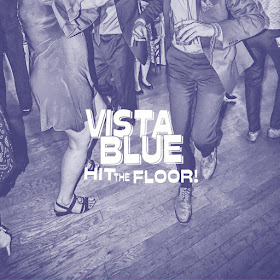 Milestone time: this is my 20th Vista Blue review! I feel like the band ought to come out of this with commemorative varsity jackets or at least its own set of F & L glassware. How is it that I've come to review a band 20 times in less than four years? Perhaps it has something to do with me and Mike Patton having many shared interests in sports and Abita beer. But in all seriousness, I think it's because Vista Blue is one of the finest pure pop bands out there. And there's nothing I love more than pure pop.

To me, the measure of a great pop-punk band is that they would be just as good if they slowed things down and were simply a pop band. If you get rid of the buzzsaw guitars and racing tempos, what do you have with Vista Blue? A terrific pop group that values melody and perfectly executed vocal harmonies above all else. That's been apparent on the 19 DIY recordings I've reviewed previously. But Hit The Floor! is where Vista Blue fully demonstrates its chops as a pop band. This was the release the band funded via Kickstarter - its first record made in a "real" studio. And that real studio happens to be Ardent Studios in Memphis. Yeah, I'm talking about THE Ardent Studios - where Isaac Hayes made Hot Buttered Soul, Big Star made #1 Record, and ZZ Top made Eliminator! How wild is that!

Having went all-in on pop-punk on its recent album Tricks and Treats, Vista Blue wanted Hit The Floor! to be its definitive power pop release. Perry Leenhouts from Travoltas (speaking of punk bands that are great pop bands!) was enlisted to handle the mixing and mastering. You've never heard Vista Blue sound this big and clean on record - and that really accentuates what the band does best. "Summer Wonderland" is full of pristine harmonies and gorgeous melodies playing up VB's long-held affections for the Beach Boys and '60s pop. It comes darn close to hitting the four-minute mark, and every last second sounds perfect to my ears. "Big Stars", featuring Leenhouts' unmistakable harmonies, is upbeat power pop celebrating Mike's humble beginnings in music. It's also a love song, and I must say it really tugs at my heartstrings! I think this is my favorite Vista Blue song ever! "Three Chord City" is a cover of an absolutely CLASSIC song by New Orleans power pop legends The Cold, written by Vance DeGeneres. Vista Blue does a great version of this song, and I hope fans will be inspired to seek out the original and learn more about The Cold.

While Hit The Floor! is very much in the spirit of all of Vista Blue's music, there's no denying it paid off for the band to go all-out and aim for a great-sounding pop record. This was a different experience for Mike - who usually has to tend to every detail of the band's home recordings. This time he got to sit back and let the professionals work their magic. That includes studio engineer Mike Wilson, along with talented band mates Richard Bates (who kills it on guitar!), Reese Chism (drums), and Mark Crowley (bass). And once Leenhouts added his special touches, you had to know this thing was going to be gold. Digital EP is available now - featuring extensive liner notes by Wyatt Funderburk. Vinyl should be out just in time for Christmas!