Dany Laj and The Looks - "Don't Keep Me Guessin'" 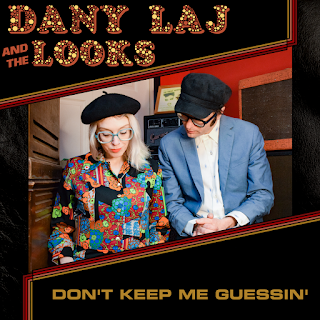 Near the top of my list of 2021 album releases I'm most excited for is Ten Easy Pieces, the third LP from Dany Laj and The Looks. The album will be out in June, and its first single "Don't Keep Me Guessin'" was recently released digitally. Clearly 2020 was a tough year for all bands and musicians. But for Dany Laj and The Looks, who absolutely live to tour, it must have been excruciating. Laj spent much of 2020 writing new songs and reworking old ones -- continuing a process that dated back to the previous year. Eventually he had enough material for three albums. But, no, it's not time for the triple LP just yet. Ten Easy Pieces will feature 12 of the best songs Laj and his bandmates have worked on over the past two years. I can tell that "Don't Keep Me Guessin'" was a fine choice for lead single because every time I play it, I end up listening to it four or five times. One play always leaves me wanting more! This is a very significant song for Laj personally. He wrote it ten years ago after he first met his life partner and bass player Jeanette Dowling. Musically, it's classic Dany Laj and the Looks. While broadly classified as power pop, this is a band that never limits itself in terms of musical style. You can't really put this song into a genre. It sounds a little like Irish folk, a little like bluegrass, and a little like pop. I like that there was a real-life happy ending to "Don't Keep Me Guessin'", but there is a cool contrast here between the uncertainties expressed in the lyrics and the lively, happy feel of the music. This is a song you can't help singing along with, and for sure it will make you wanna dance. You know it will be a crowd favorite once it's safe enough for Dany Laj and The Looks to get back out on the road! For now, you can download "Don't Keep Me Guessin'" from a variety of digital platforms. And watch out for Ten Easy Pieces, which releases June 11 on Toronto-based label We Are Busy Bodies!
-L.R.
https://wearebusybodies.bandcamp.com/album/dany-laj-and-the-looks-ten-easy-pieces
https://danylaj.bandcamp.com/
https://www.facebook.com/danylaj
http://danylaj.com/
Posted by Lord Rutledge at 1:36 PM