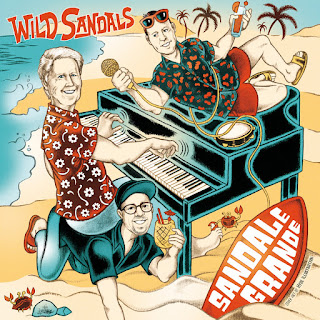 It's been well-established that I like pop-punk the best when it sticks close to the harmony and melody driven traditional pop music of the early-to-mid '60s. And if that's the case, you'd figure that I'd be going crazy for the new album from Wild Sandals. You'd sure be right! Wild Sandals are Florian from The Favorats and Beppo from The Hawaiians teaming up to cover classic surf and pop songs from the '60s...and write original songs in the very same spirit. While Brian Wilson isn't actually in the band, he might as well be! If you love the Beach Boys inspired strain of the pop-punk genre, Wild Sandals ought to be right up your alley.
Out on Ramonescore Radio Records, the 14-track Sandale Grande hits that sweet spot where pre Pet Sounds Beach Boys intersects with the first four Ramones albums. If that sounds like I'm describing Don't Back Down era Queers, then it's totally logical that Joe King himself makes an appearance on this album! I'm reminded quite a bit of last year's excellent Hawaiians album Invading the Summer. The difference is that with all of the covers on this release (9 of 14 tracks), this album is even more of a tribute to the golden age of pop and rock and roll. Among the classic bands/artists covered are the Beatles, Beach Boys (twice!), Monkees, Herman's Hermits, and Ricky Nelson. I would have dug this record even if it had been all covers. But the originals are amazing in their own right. "Butterflies" and "One Summer Long" (featuring Hayley Cain) fit right in with all of these bubblegum/surf/pop classics. And "All Screwed Up" is the best new pop-punk song I've heard in ages! With Florian and Beppo involved, you know the harmonies are on point! This is an absolutely perfect pop-punk record, and it will instantly transport you to a world full of teenage romance, fun in the sun, and timeless melody. To cap off the album, the duo takes on a modern pop-punk classic in Neon Bone's "Without You".  What a fitting way to bring this record to a close! Neon Bone, in my book, is the best pop-punk band going these days. I often joke about how the Germans are the best in the world at making beer and making pop-punk. I'm starting to think it's not a joke at all!
-L.R.
https://ramonescoreradiorecords.bandcamp.com/album/wild-sandals-sandale-grande-rcrr-004
https://www.facebook.com/wildesandalen/
https://www.facebook.com/RamonescoreRadio/
Posted by Lord Rutledge at 2:59 PM

"All Screwed Up is a Queers cover ;p

Well they stole the song title, but it's not a cover.