You Wanna Know What It's Like? - A Tribute to the Hollywood Brats & The Boys 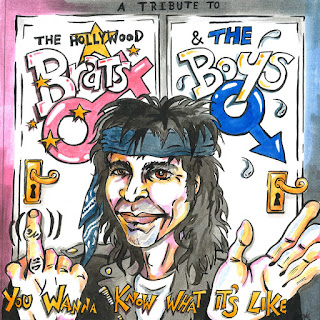 I don't often review tribute albums. But in the case of the newly-released You Wanna Know What It's Like?, there was just no doubt that I was going to have something to say! This tribute to the Hollywood Brats and The Boys was assembled two decades ago. For various reasons, it never saw the light of day...until now! With most of the world now in lockdown, The Italian label Desert Inn Records decided it was time to give this compilation a proper release and "let people have a good time listening to some great music while in isolation". Now that's a mission I can wholeheartedly endorse. And while this is currently a free download, any proceeds from individuals who choose to pay will be donated to the Italian Red Cross.

Let's start with the obvious: outside of the Ramones, Buzzcocks, and Undertones, The Boys were probably the biggest single influence on the punk/pop/rock and roll scene I champion to this day. The Hollywood Brats were the greatest early '70s glam proto punk band that most people never heard. The link between the two bands, of course, is the tremendous keyboardist Casino Steel. You Wanna Know What It's Like? features covers of many of both bands' most beloved songs. Because the album was put together 20 years ago, the band lineup reads like a who's-who of Y2K era glam punk and punk rock and roll. Hearing all of these bands is like traveling back to the year 2000 on a time machine stocked with back issues of Hit List. Suddenly, I'm nostalgic for my shitty later-20s years that were only made bearable by the punk rock records I was acquiring on a daily basis. When I saw that the Beat Angels ("Terminal Love") and Trash Brats ("Sick On You") were on board, I was instantly sold on this thing. And you can never go wrong leading off with the mighty Jeff Dahl (who turns in a uniquely Dahl-ish rendition of the Hollywood Brats' "Chez Maximes")! Fans of later '90s glam punk rock and roll will surely recognize bands like Thee S.T.P., The Dialtones, Streetwalkin' Cheetahs, Aerobitch, and The Turpentines - who all put their signatures on Boys classics. My man Dimitri Monroe even makes an appearance - offering up a splendidly trashy take on the Brats' "Nightmare". First State Thrill Killers (featuring Vince and Randy from the brilliant Jake and the Stiffs) do a killer version of The Boys' "Schooldays". To the best of my knowledge, this is only the third time that FSTK have appeared on an official release (the other two occasions being tribute albums to GG Allin and GG & The Jabbers). I had somehow never heard of the Finnish band Hundred Million Martians, but their version of "Soda Pressing"  is an absolute highlight.

You Wanna Know What It's Like? really hits the spot for a tribute album. Its primary focus is to celebrate the music of a couple of legendary bands, yet few if any of these tracks sound like straight copies of the originals. Because this album went unheard for two decades, it ends up being far more than a tribute. It's also the ultimate time capsule for late '90s/early 2000s glam-punk, trashy pop, and rawk. This collection was assembled with tremendous affection for not just the Boys and Hollywood Brats but also for all the bands that appear here. This was a true passion project, and it's never too late to get such a thing out into the world. Go snag a download of this bad boy and donate if you can!

So funny that this comp appeared out of nowhere. I remember when we did that song for this. It was all so fuzzy about what it was for and when it was going to come out and... FF twenty years. Why was he sitting on this all these years? Great stuff.