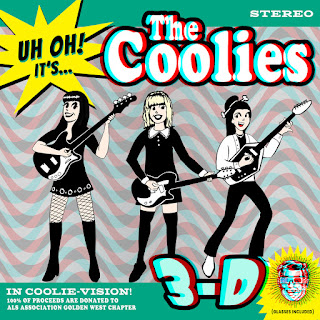 There are supergroups, and then there are SUPERGROUPS! The news that Kim Shattuck and Melanie Vannem (Pandoras/The Muffs) had teamed up with radio personality extraordinaire Palmyra Delran (Pink Slip Daddy/The Friggs) to form a cartoon super-trio had me excited beyond belief. My only concern was that a lineup like that was going to set a very high bar in terms of expectations. Well I must tell you: The Coolies are here, and they had no problem whatsoever clearing that bar! They are everything I imagined they would be and more. Their debut release, a 10" record from Wicked Cool Records, sold out so quickly that a second pressing is already in the works. And with all profits from this release going to The ALS Association Golden West Chapter, it warms my heart to see it doing so well! As you would expect from a collaboration involving these three rock and roll icons, these six songs hit that sweet spot where punk, garage, and '60s pop converge. Kim Shattuck is the primary songwriter, but all three band members are key contributors. I'm especially fond of the Palmyra Delran co-write "Blueberry Crumble". Due in no small part to a guest appearance on theremin from Stevie Van Zandt, this song will have you imagining The Coolies turning up on an episode of Scooby-Doo! "Uh Oh!" sounds a lot like The Muffs (obviously!), and those harmonies are absolutely dazzling. "Ignoramus" puts the rock in garage rock, while the sweet country of "Glad I Met You" and perfect pop of "Yeah, I Don't I Know" will only cement Kim Shattuck's rep as a true master of melody-driven songwriting. If you're a fan of these three amazing women, you will not be disappointed by The Coolies. And if you just love poppy punky garage rock in general, this is a release you won't want to miss. Reserve yourself a copy now!