The Safes - A Tribute To Juliana Hatfield 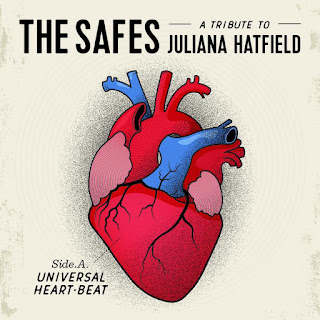 So this really happened! The Safes, one of my favorite bands, went into the studio with the rhythm section from Material freaking Issue (one of my three favorite bands EVER)! And the producer was Steve Albini?! Holy smokes! Even if I did not enjoy the music of Juliana Hatfield, I would have been super stoked about this record! But let's not bury the lede here. What stands out the most to me about A Tribute To Juliana Hatfield is that these are such great songs! Ultimately the whole point of a successful tribute project is to honor the source material, and this one does that brilliantly.

When presented with the opportunity to record this single for American Laundromat Records, the brothers O'Malley jumped at the chance. They are huge fans of Juliana Hatfield and the label as well. The involvement of Ted Ansani, Mike Zelenko, and Albini was just a (really cool) bonus! For this project, they chose to cover "Universal Heart-Beat" from 1995's Only Everything and "I See You" from 1992's Hey Babe. I appreciate that The Safes managed to put their own signature on these songs while still remaining largely faithful to the original versions. "Universal Heart-Beat" is a bona fide alt-rock classic, and The Safes don't mess with it too much. I like the cool, Lou Reed-ish vocals, but otherwise the original style of the song is followed to a T. There's just no point in playing around with that chorus - one of the catchiest and most memorable of its time. And I love that little sprinkling of Wurlitzer. In preparation for this review, I went back and listened to the original several times. What really strikes me is how well it holds up after 23 years and just how underrated Juliana Hatfield is as a songwriter. "I See You" goes back even further to Hatfield's first solo album. I would say it's a hidden gem of her catalog. But being huge fans, The Safes were well aware of that! Again they follow the general melody and structure of the original, but they really do put a Safes stamp on the song. The original sounds so innocent and bubbly, whereas the O'Malleys give it a more mature and modern reading. If you didn't already know this was a Juliana Hatfield song, you could easily believe this was something The Safes wrote themselves. And of course after multiple listens to both versions this week, what really sticks with me is what an earworm that melody is! If you didn't know it already, know it now: Juliana Hatfield writes damn good pop songs!

A Tribute To Juliana Hatfield is available only on vinyl from American Laundromat Records, and it's limited to just 500 copies. Given that these are songs from twenty-some years ago, this might be an opportunity for a whole new generation to discover Hatfield's back catalog. And certainly some of Hatfield's fans might end up coming to love The Safes - in my opinion one of the greatest American rock n' roll bands going. Hatfield herself was thrilled with these two tracks, and no doubt she sensed the tremendous affection the O'Malleys have for the original versions. This whole project is all about a genuine love for music, and that's something I can always get behind. Did I get goosebumps hearing those drums and bass? You betcha!