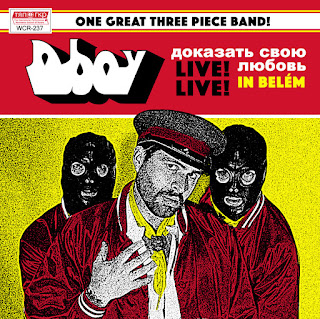 Releasing today is the excellent debut long player from Welland, Ontario's Dboy. On the surface this may appear to be a fake live album. But aren't all the best live albums fake? Besides, "fake" is such a harsh term. In Dboy's case, it's more like pro wrestling kayfabe. If you choose not to believe that Dboy live under secret identities and only communicate with the public via their Moscow-based spokesman Kirill Kutchokokov, you're totally spoiling the fun! The band's web site even contains a "13-point program to end sonic austerity" (my favorite is Point 5: "Dboy is a rite of passage, minus the 'p'") and offers fans the opportunity to apply for membership in the Official Dboy Scout Order. Most importantly, the music will more than justify anyone's commitment to the cause. This is some great straight-ahead catchy punk rock n' roll that takes absolutely nothing seriously except its mission to melt your face off. Think Hex Dispensers or Misfits (minus the horror) with the spirit of early Turbonegro. The band tears through 12 songs in under 25 minutes, and it's a ripping good time to the very end. And while song titles like "Born With A Hard-On", "Fecal Alcohol Syndrome", and "Dboy Balls" are in no way misleading, it would be going too far to dismiss this as a joke record. Especially on killer tracks like "Three Piece Band" and "Prove Your Luv", Dboy demonstrates that any underlying gimmicks are secondary to the music itself. If you enjoy ballsy garage punk with hooks, I wholeheartedly recommend checking out this mysterious power trio from the land of Cal Clutterbuck. Neckerchiefs sold separately!