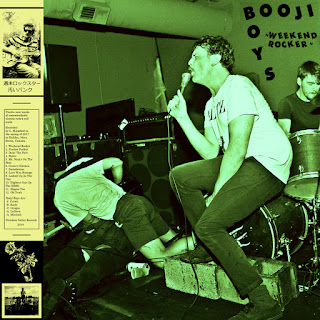 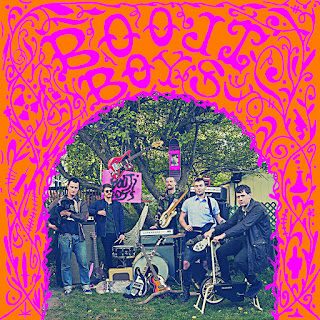 My greatest failing of 2017 was not getting hip to one of the greatest punk albums of the year - Booji Boys' self-titled debut - until way late in the game. Luckily I didn't have to wait long to make amends, as Booji Boys managed to get another LP out the door just before the close of the year. So you could say it took me a year to review Booji Boys' first album and nine days to review their second! This band hails from Halifax, Nova Scotia. I swear I'm not taking part in any kind of active conspiracy to only promote Canadian bands. It only seems that way sometimes. Rather than risk the potential controversy of arguing that one of these two albums is more essential than the other, I will merely urge you to purchase both and double your pleasure. What I love about this band is that I can't neatly classify its sound. It's super lo-fi but not really garage. It's got hooks, but it isn't really pop-punk. It's fast and chaotic but not really hardcore. It's new wave inspired, but it's totally punk rock. If I had to pick one word to properly label Booji Boys, I would just go with "great" and be done with it! Weekend Rocker doesn't stray too far from the blueprint of the self-titled album, but it's by no means a mere re-hash. Again Booji Boys show the ability to cram quick bursts of punk urgency full of quality hooks - and do so in such a way that makes "proper" sound quality seem not only unnecessary but perhaps even counterproductive. Most of these tracks blaze by in well under two minutes, radiating the kind of energy and excitement that will make you wanna jump around the room and scream real loud just for the sheer joy of it. And then, unexpectedly, the album closes with a seven-minute experimental epic that wouldn't have sounded out of place on a prime era Husker Du release.

Perhaps this is just a limited-time offer, but Drunken Sailor Records has Weekend Rocker available as a name-your-price download over at Bandcamp and is only asking £4 for the digital version of the self-titled album. That's a deal and a steal! And if you want the vinyl, you better hop to it. Although Weekend Rocker was just released on LP on Christmas day, 100 copies on green vinyl are already gone. There were an additional 400 copies were pressed on black, and they're going fast!