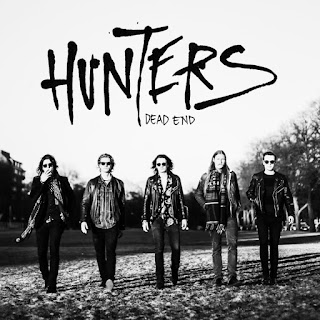 I'm always game for a really great pure rock n' roll record, so the debut album from Hunters is totally hitting the spot for me. With Hunters emerging from the streets of Helsinki and wearing the influence of early rock n' roll, '70s punk, and golden era glam rock on their sleeves, most people will be quick to make  a comparison to Hanoi Rocks. And while that's not off the mark at all, I'd say Hunters are more of a straight-ahead rock n' roll band with catchy, fist-pumping choruses. The album is called Dead End, and it was released earlier this year by the Finnish label Stupido Records. Glunk Records has just made it available from its web store, so this is a great opportunity for my friends in the U.K. to score a real belter of an LP!

Kicking off with the punky/glammy rockin' title track, Dead End wastes no time getting down to business. This is a band that's about the rock and the roll - with smokin' guitars and big hooks at every turn. For sure, Hunters have stacked this record with hits! "Radio" delivers a sing-along chorus worth its weight in gold, and "Tribute" is as exuberant and life-affirming as rock n' roll gets. "Before You" is infectious girl group pop sauntering through a New York Dolls back alley, while "Crackdown" has a grimy Dead Boys feel with just the right amount of saxophone. And while "Get Wrecked" will do nothing to discourage the "street rock" label often placed upon this band, the true spirit of Hunters is found in the '50s rock n' roll frenzy of anthemic album closer "We're Alright". Now that is a rousing number!

Every so often, we are treated to one of those records that reminds us that rock n' roll is still king. The debut album from Hunters is one such release. No advancements or innovations in modern music can ever replace the sheer glory of those triumphant, primitive sounds that implore us to dance around wildly, sing along at the tops of our lungs, and just have fun being alive. And while Hunters naturally impress in the attitude and taste departments, their talent for quality songwriting should not be underestimated either. They are major up-and-comers in the world of below-ground rock n' roll. In yet another stellar year for punk/glam/rock n' roll LPs, Dead End is one of the very best.

This is just brilliant. Reminds me of The Hurriganes (track down Get On by them)or Lemmy on vocals for The Count Bishops. Thanks for the heads up.
Cheers
Don