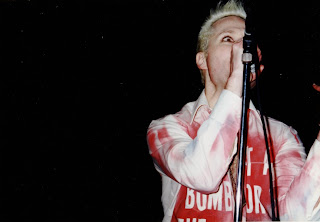 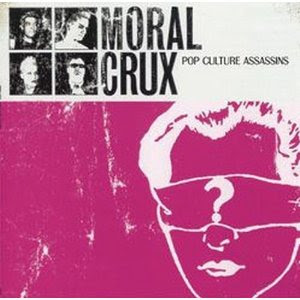 It seems fitting that Moral Crux would be one of the first bands inducted into the F & L Hall of Fame. They along with the Spent Idols were one of two bands who kick-started my love affair with the ‘77 punk sound, which has spanned 17 years and counting. It was 1995, and I mail-ordered a copy of I Was A Teenage Teenager by Moral Crux after seeing it advertised in Maximum RocknRoll. It’s kind of a cliché thing to say, but my life would never be the same. It’s not quite accurate to call Moral Crux part of the ‘77 punk revival, as they’d actually been around since 1983. But getting into Moral Crux, Spent Idols, etc. really got me started on the path that would lead me to so many of the bands I’d later become associated with as a reviewer. Before there was the Dimestore Haloes or Stitches or Stiletto Boys or Dead End Cruisers, there was Moral Crux.

What I loved back then (and still do now) is that Moral Crux combined the best of two worlds. Musically they were classic ‘77 punk/pop driven by catchy melodies and actual singing. But lyrically, they had a political message and social conscience. It was as if Generation X and the Canadian Subhumans had a head-on collision at The Ramones’ practice pad. Being a typical recent college grad across-the-board liberal, I ate that stuff up. But today, as a middle-aged non-partisan, I appreciate Moral Crux even more. As it was with The Clash, the themes of Moral Crux’s music transcend youthful rebellion. One never gets “too old” to distrust institutions of power, stand up for the little guy, and question the so-called “truths” that comprise mainstream thinking. Sure: 90 percent of the time, “political” punk rock is lame. But when it’s done well, there’s nothing better. Moral Crux is one of the finest political punk bands there’s ever been, and pushing 30 years of existence the group is still going strong. Singer James T. Farris has been the band’s constant from the beginning, and along side longtime collaborator Jeff Jenkins on guitar he’s kept Moral Crux a vital force in underground punk. The band has done six full-length albums, and they’re all equally great, from the lo-fi, hardcore-flavored 1987 debut and ‘89’s The Side Effects of Thinking to the more polished pop-punk of Panic Button/Lookout issues Something More Dangerous and Pop Culture Assassins. This is a band that has never “reinvented” itself. This is a band that’s remained in its small town Washington state base for three decades, never relocating to the “big city”.

Moral Crux played a huge part in my zine writings over many years. An early print issue of Now Wave Magazine featured a full-page write-up on Something More Dangerous. I did a lengthy interview with James that appeared in Pat Grindstaff’s Rock N’ Roll Outbreak. Pop Culture Assassins was reviewed multiple times on the Now Wave web-zine in 2003. It’s a pleasure to write about Moral Crux again, and something tells me this won’t be the last time. The common thread with all great protest music, whether it’s Woody Guthrie, Stiff Little Fingers, or Midnight Oil, is that the message only resonates because the songs are great. The same is true about Moral Crux. Track down all their albums. You won’t be disappointed.

http://www.reverbnation.com/moralcruxofficial
Posted by Lord Rutledge at 7:18 AM

Without a doubt, one of THEE most underrated punk bands of the U.S.A.!

Grew up in Wenatchee, WA and loved this band as a kid (still do). James was always so cool, kind and down to earth. He really inspired me as a baby punk and talked with me as if I was a real person after shows when I was 14 or so and very confused and angry. It meant a lot to me. He's a great man.