My Ten Favorite Bands of the 2010s 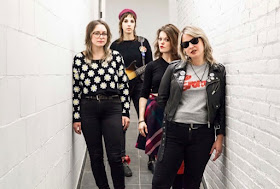 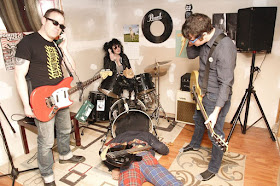 As a companion piece to my recent post on my ten favorite albums of the 2010s, I thought it would be fun to also list my ten favorite bands of the decade. Of course you can expect some overlap between the two lists. But rather than focusing on individual albums, I'm looking at total body of work for the decade. And on that note, let's get on with it. Bandcamp links have been provided so you can hear the music for yourself!


10. The Shanghais
This is the only band on this list that never released a full-length album (although Natalie Sweet's recent solo debut was created largely from songs intended for the first Shanghais LP). Natalie and friends released three EPs full of power pop/girl group/bubblegum punk goodness that remain very much worthy of your attention. The entire discography can be had for 12 bucks from Bandcamp, and that's a (no pun intended) sweet deal!


9. Vista Blue
Come on! How was a band I've reviewed 20 times not going to make this list? Vista Blue is my favorite pop-punk band, but they lean far enough in the power pop direction to interest people who don't always listen to pop-punk. Among the band's incredible 32 releases available on Bandcamp, the vast majority are free downloads. If you've written VB off as a baseball band or a horror band or a Christmas band, well...Can they really be all of those things?


8. Phone Jerks
I spent much of the first half of this decade bitching about all of these so-called "garage" punk bands that had nothing to do with garage or punk. I found myself longing for the days when "garage punk" meant Teengenerate and Supercharger. Finally Phone Jerks answered my prayers.


7. The Dahlmanns
What a decade of music from The Dahlmanns! By my count, there have been 13 EPs and one album...and all of it gold. This band is what power pop music is all about, and you won't regret a cent you spend tracking down as much of the discography as you can!


6. Night Birds
I listed Born To Die In Suburbia as my third favorite album of the decade, but honestly I could just as easily have gone with Mutiny at Muscle Beach. And I'm still somewhat perplexed that last year's brilliant EP Roll Credits went so under the radar. Night Birds brought early '80s West Coast hardcore and surf punk to the eastern shores and ultimately became the top punk group of the decade. It's stunning how prophetic "Left In the Middle" proved to be.


5. Nato Coles and the Blue Diamond Band
My thoughts on this band have been well-documented of late. Play loud!


4. The Cheap Cassettes
I've raved about this band's debut album, but honestly that was just the beginning. The Cheap Cassettes have done their best work on their three EPs released in recent years. The best in power pop meets first wave punk and rootsy rock and roll from these ex Dimestore Haloes and friends.


3. Midnite Snaxxx
Dulcinea Gonzalez, in my book, is her generation's most underrated punk rock songwriter/vocalist. The ex Loudmouth formed Midnite Snaxxx in the early part of the decade and navigated multiple lineups and a staggering musical progression over the course of three great albums. This band has touched on everything from garage to power pop to post-punk to old school California punk, and I've loved all of it!


2. Pale Lips
Definitely my favorite band of the latter part of the decade, with two great LPs and three terrific singles in the books since 2015. I remember first hearing about this band from Mick Fletcher. I swear the check's in the mail, mate!


1. The Connection
True story: I was a little out of the loop when I started this blog. Looking for bands to review, I noticed that my friend Dave Getzoff had played The Connection on his radio show. So I reviewed The Connection for the first of 13 times. And this ultimately led me to Kurt Baker, The New Trocaderos, Kris Rodgers, and so much more of my favorite music of the decade. The Connection would come to influence the musical direction of this blog over the years - combining my beloved punk and power pop with the timeless sounds of late '50s/early '60s rock and roll.

So there you have it! Hopefully I can do this again in another ten years!