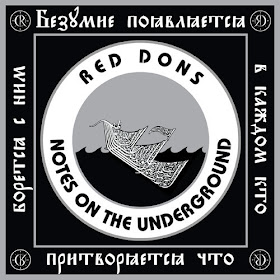 What's the best present-day band that I've never reviewed before? Easy answer: Red Dons. Why have I never reviewed Red Dons before? That's the tougher question! But, you know, it's never too late to atone for past omissions. Red Dons have a new 7" out on Grave Mistake and Taken By Surprise Records - their first since last summer's "Ausländer". And in keeping with previous releases, their sound continues to be one-of-a-kind yet still firmly in the realm of the melodic punk style I'm known to tout. Not many punk bands are releasing A-sides nearly five minutes in length. Even fewer could actually get away with it! But "Cold Hearted", which leads off Notes On The Underground, is up there with the best of the Red Dons' 7" tracks. Imagine, if you will, a genetic experiment where Echo and the Bunnymen's DNA got mixed with the Marked Men's. The intro approaches two minutes and highlights some truly exquisite lead guitar work. It's brooding and eerie, but by no means plodding. Even after the vocals come in, the song's dark undercurrent is no way obscured by its overt catchiness. If this is a sign of what's to come from Red Dons, we all should be very excited!

The back half of Notes On The Underground is more conventional but hardly pedestrian. "Losing Track" is textbook contemporary pop/punk with catchy leads, chunky bass lines, crazy sick drumming, and a melody that you will not be able to get out of your head for weeks. Coming on the heels of the more measured "Cold Hearted", it brings a nice surge of energy to the record. It's my fave track of the three. "Dead Ender" is in a similar vein of crisp & punchy melodic punk. It didn't shock me to discover that the latter two tracks were recorded a few years back, while "Cold Hearted" was just recorded this year. But in spite of the contrast between the sides, Notes On The Underground is an entirely satisfying EP. "Losing Track" and "Dead Ender" may be "lighter" in tone than Red Dons standards like "Ausländer" and "A Forced Turning Point". But they are killer tracks, and are sure to please anyone who's nuts for the "Dirtnap sound" . Given that the core members of this band are separated by thousands of miles and a very large ocean, it's no surprise that Notes On The Underground was three years in the making. But if you're a fan, you'll have to admit it was totally worth the wait. My first Red Dons review will definitely not be my last!