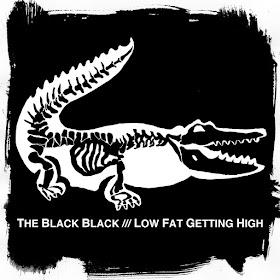 You know how I feel about splits. I like both sides to have some sort of common thread. I'm not saying that the two bands should sound exactly the same, but I like there to be some similarity or commonality that will make the listener want to flip the record over. Otherwise you just end up wishing that it was the same band on both sides. On that note, a couple of up-and-coming hardcore bands from Brooklyn have just stepped up and demonstrated exactly how a split should be done!

Low Fat Getting High (love the band name!) have a classic post-hardcore sound on their track "Lacoste". They've got the epic tempo shifts, pounding drums, thick bass, and metallic guitars you'd expect. And it's all carried off with a strong sense of melody and a nicely polished crunch. Lyrics and vocals are intensely personal and packed with sincere emotion. The noise factor is there but doesn't get in the way of the music. In a good way, I'd describe this as post-hardcore with modern rock crossover potential - like maybe if Foo Fighters sounded more like, uh, early Nirvana? I'm hella impressed!

The Black Black are in a similar vein but more groove-happy. Their track, "One Blunt Death Party", is definitely in the Fugazi by way of Gang of Four mold of post-punk. These guys are probably not as "metal" as LFGH. But in their own way, they're equally as good. They're incredibly talented from a musical standpoint, and they've got the chemistry to make it all sizzle. Their style is pretty dissonant but still really catchy due to melodic guitar leads and that punching, grooving bass. I'm not usually a big post-punk guy, but this song has sunk its hooks into me for sure.


All in all, this is an exemplary split. I like that both bands are of an equal high quality. And rather than pad this release with filler, they both picked one standout track that really shows what they can do. When a split is good, it's like getting two bands for the price of one. And this one is definitely good. If you're at all into the post-punk/post-hardcore thing, you will not want to miss out!