Year of the Prostitutes 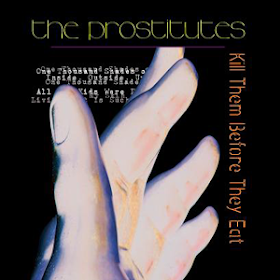 I reviewed a Prostitutes record for the first time in 1996. If you had told me then that I’d still be writing about The Prostitutes 16 years later, I would have sworn you were bat-shit crazy! Partially that was because I figured The Prostitutes would, like so many classic punk bands, make a couple of great records and then disappear forever. More likely it was because I had a hard time envisioning myself still being a “punk rock” guy at age 40. But 40 has arrived, and my musical tastes haven’t changed a lick. It’s been a lot of years. In the time since The Prostitutes first arrived on the scene, we’ve lived through three presidents, ten postal rate increases, 22 more seasons of The Real World, 80 international wars, and 199 Playboy Playmates. I’ve had four significant others and gained 70 pounds. If you conceived a child while listening to the then brand-new “Get Me Sick” 7-inch, that baby is now a high school student. We’ve gone from dubbing vinyl records onto cassette tapes to downloading MP3s off of social networking web sites. We have electric cars and talking maps. This is it. This is the future. Punk rock is not a “phase”. And The Prostitutes, in the year 2012, are going stronger than ever!

You may recall Kevin McGovern recently won the Lord Rutledge Man of the Year award for 2011. But truthfully, it’s 2012 that’s going to be the real Year of the Prostitutes! A brand-new LP is in the works, but first up is a worldwide reissue of the band’s brilliant sophomore LP. In the 12 years in between the band’s first and second albums, McGovern re-booted The Prostitutes numerous times in numerous locations with numerous band-mates. You might have expected a very, very different Prostitutes in 2009 from the one you knew and loved in 1997. And for sure there was growth in McGovern’s vision and artistry over all those years. But the instant that Kill Them Before They Eat kicks in, you know you’re listening to The Prostitutes. If you thought it was impossible for the second Prostitutes album to top the first, you seriously underestimated Kevin McGovern!

Granted: Kill Them Before They Eat is by no means Can’t Teach Kids Responsibility part 2. It sports a modern, ultra-crunchy production, and there’s a lot more sophistication in the structure of the songs. The vibe is darker. Yet it’s still classic Prostitutes to the core. McGovern’s voice - in my opinion the greatest punk voice of his time - is not even slightly mellowed by full-fledged adulthood. The man sounds more and enraged and deranged than ever, and his poison pen is in prime form. Themes of social alienation, chemical abuse, general depravity, and good old-fashioned people-hating prevail as always, with lyrics full of unhinged vitriol and twisted humor (“I Wanna Go to Hell” and “Living Is Boring”, as you may have guessed, are not songs about milkshakes and hand-holding). This is not a kinder, gentler Prostitutes - and thank God for that! If anything, the deadly virus known as The Prostitutes has grown stronger over time. And perhaps because KTBTE collects material from a decade’s worth of writing, it’s got even more classic songs than Can’t Teach Kids Responsibility! Some of them you might already know (“Hung by the Phone”, “They’re All Dead”), and some you might not (“Hit Me”, “The New Cure”). Either way, this is either the catchiest snotty punk or the snottiest catchy punk you’ll hear all year. And songs like “Night Time Parasite” and “Electrocution” , with their dense guitars and moody tempo shifts, really herald The Prostitutes’ evolution from East Coast miscreants to Southern Californian sleaze-mongers. Listen to the way “Whatever” comes out blasting with those thunderous Steve Jones style guitars, reels you in slow, and then socks you in the mouth with that anthemic chorus. Now that is the way a punk band is supposed to “evolve”!

I have long maintained that of all the bands I raved about in the late ‘90s and early 2000s, The Prostitutes have held up the best over time. At 40, I may be a little less prone to hyperbole than I used to be. So it’s probably premature to proclaim Kill Them Before They Eat one of the greatest punk LPs of the 2000s. But it’s every bit as good as Can’t Teach Kids Responsibility, which was one of the five best punk albums of the ‘90s. You do the math.