Extra Arms - Up From Here 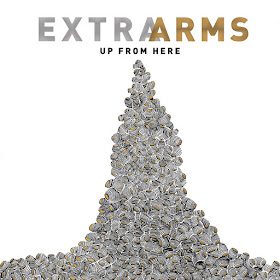 As a huge fan of Detroit foursome Extra Arms, I was excited to find out that we were getting a second album from the band just one year after the release of its first. Headacher, Extra Arms' debut as a full band, was a gem of an album and absolute treat for anyone who fondly recalls the huge, hooky alternative rock of the later '90s. I am very happy to report that Up From Here is an absolutely extraordinary follow-up. What I'm not so happy to report is that it was inspired by a really terrible year in the life of front-man Ryan Allen. Ever since I heard his solo effort Heart String Soul four and a half years ago, I've considered him one of my favorite songwriters. Listening to Up From Here's opening track "F.L.Y." is like hearing a friend in distress. But while Allen is very up-front about this album being about the end of his marriage, this is in no way the depressing divorce record you might expect. Allen has always had a knack for writing about his personal experiences in a way that makes them come across as universal. And that's what he's done with Up From Here. Yes, these songs are extremely personal to him. But at a broader level, they're about encountering an unexpected loss and figuring out how to make a new, better life for yourself. You take your punches (literally and figuratively), and little by little you work yourself back to a good place. Who can't relate to that?

While the Sugar/Superdrag/Superchunk influences that powered Headacher are still very much at play on Up From Here, the feel of this album is a little different. Running just 22 minutes, it's got a punkier bite to it - especially on the first few tracks. And that perfectly suits this powerhouse of a band (also including Michael Gallacher on guitar, Ryan Marshall on bass, and Daniel Stover on drums). "F.L.Y." and "Disruptor" rip hard & fast and find Allen fully embracing his punk rock roots. "Secret Friend" is the heaviest track this band has done to date. Allen's narrative begins in a very dark place, and the music is reflective of that. You can hear the lyrics for yourself, but let's just say that Allen doesn't hold anything back. With the full force of kick-ass band behind him, he really lets it all out. Some of these songs are flat-out intense! You can feel the tide turning as the album progresses - Allen moving from rage and despair to self-reflection, acceptance, and finally genuine hope. "Comes In Waves" and  "Hold Me (All The Time)" are thundering shots of radio-worthy power pop that are perfectly suited to Paul Miner's massive production. "No Enemies" is a rocker that would make Bob Mould proud. And the title track is the soaring, optimistic closer this album needed to step fully into the light.

I cannot emphasize enough how much Extra Arms rock (Stover on drums is an absolute animal!). This is one of those groups that puts the power in power pop - like Cheap Trick or Material Issue back in the day. No wonder Allen didn't feel right putting his name above these other guys! I think some people will hear "divorce record" and automatically presume it will be full of mopey ballads. But Up From Here is about as far from that as you can get. Its mix of crunching power pop and powerfully emotional punk is carried off with an energy that is undeniable. There's part of me that feels guilty about enjoying this record so much: like, is it right that another person's pain should bring me such pleasure? But isn't that essentially the history of most great art and popular music in particular? Life has kicked all of our asses at one point or another. But we come back from it and find new beginnings. Allen has daringly laid his soul bare for all the world to witness, and it's my hope that more than a few people will be comforted or encouraged by this record. Music always makes things better. Whether you're invested in the story or just want to rock out like the '90s never ended, Up From Here is the best record that Ryan Allen has ever lent his name to. Although, technically, he didn't lend his name to it. Vinyl is out on Dadstache Records in the U.S. and Get Party! Records in Canada. Full stream available here!