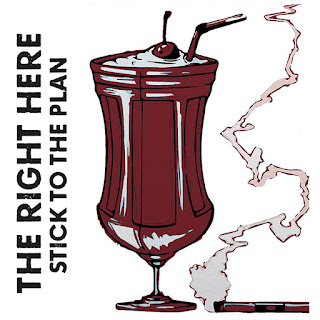 Rum Bar Records has completed its heartland punk trifecta in style! Having released a pair of gems last year in Mono In Stereo's debut album and the deluxe reissue of Nato Coles and the Blue Diamond Band's Promises To Deliver, Malibu Lou knew he had just had to jump on the latest album from The Right Here. Stick To The Plan is the second full-length release from the Minneapolis foursome - and its first since 2012's All Herky Jerky. A co-release between Rum Bar (compact disc) and Throwing Things Records (vinyl), Stick To The Plan is out today.

If you haven't heard The Right Here since its last album, I think you'll be pretty blown away by Stick To The Plan. With the assistance of engineer extraordinaire Andy Mathison, the band has fully come into its own on this stellar release. This is the kind of record you'd expect to emerge from the frigid upper Midwest - 13 heartfelt songs blending rootsy punk rock, alt-country, and rugged all-American rock n' roll. Luke Lecheler plays some mean rock n' roll lead guitar, and Ryan Haasch is a total ball of fire on drums! I like that the band brings the big anthem right off the bat with the impassioned "That's All We Got And More" - a thundering powerhouse of a song that a lesser band might have held back until the end of the album. Spoiler alert: this is only the first of several anthems on this record! Stick To The Plan does have its share of ballads, and they're quite good. In particular, "Drunk And Rolling Around" and "One More and We'll Move On With Our Lives" combine a haunting old country feel with Westerbergian influences that ought to be mandatory in the Twin Cities. But first and foremost, this record rocks. It sounds great on the open road with the windows down, and locals ought to purchase promptly given the short-lived nature of Minnesota summers. "Judge Me When I'm Sober" and "'Til The Wheels Come Off" are the very definition of fist-pumping anthems (please keep one hand on the wheel if you're driving). "If This Land Isn't My Land" is what all folk-punk should aspire to be, and I can't listen to it without picturing hundreds of crazed fans storming the stage to sing along. "Leaving For A Reason" was the perfect choice for the lead single/music video - it's everything I like about The Right Here combined into one song.

Having worked a very long time to bring Stick To The Plan into the world, The Right Here has every reason to be proud of this album. These guys have written the best songs of their lives, and they've delivered a fantastic record full of heart and guts and profound truths. If you're already hip to the previous installments in Rum Bar's heartland trilogy, you're gonna love this one as well. If not, the label is offering all three for just 25 bucks. Grab a Hamm's from the fridge and enjoy some fine music!