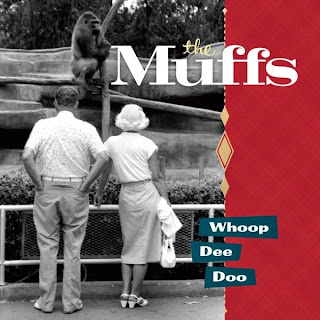 What you've heard is true! The almighty Muffs have returned from a decade of inactivity with their best album since Blonder and Blonder! Can you believe it's already been ten years since Really Really Happy came out? Where did the time go! Truthfully, I don't think this band has ever made a bad record. But it has been quite some time since The Muffs truly sounded like The Muffs. Know what I mean? Obviously, you're going to stockpile some exceptional material when you wait ten years between albums (especially when you're a gifted songwriter like Kim Shattuck). But it's more than just that that brings life to Whoop Dee Doo. Returning with a renewed energy and vastly improved production, the legendary pop/punk trio is genuinely rocking again. And Kim's voice hasn't sounded this good since the mid-'90s! She howls and hollers like only she can on opening tracks "Weird Boy Next Door" and "Paint By Numbers" - a couple of songs that would not have sounded out of place on either of the band's first two albums. And from there, it only gets better. While it would be absurd to suggest that The Muffs haven't grown musically over the past two decades, this album does prove to be a return to the form of The Muffs and Blonder and Blonder. If you love those records and have been waiting for The Muffs to make another album along those lines, your ship has finally come in!

With Whoop Dee Doo, we get the best of both worlds: the punch and growl of The Muffs' early work combined with the more sophisticated, '60s pop influenced songwriting that have characterized the band's more recent releases. I feel like veteran rockers such as Kim Shattuck have so much to offer the world due to the life experience and seasoned musical chops they bring to the table. This Muffs lineup - unchanged for 20 years - sounds like it has taken a dip in the Fountain of Youth. It really shows that the band had fun making this record. Kim's lyrics - by turns scathing, tender, and hilarious - are probably the best of her career. And of course she shows her usual knack for crafting perfect pop songs. "Cheezy" and "Forever" stun with gorgeous, Beatle-esque melodies. "Up And Down Around", with its lush backing vocals and hugely hooky chorus, is the very definition of classic Muffs. And with more than a few rockers thrown into the mix ("Take A Take Me" rejoices in the band's garage rock roots), this album successfully revisits the formula that worked so well on the band's first two albums. I like The Muffs as a pure pop group but truly love them as a punky pop group.

And at a time when so many current power pop/punk bands cite The Muffs as a huge inspiration, Whoop Dee Doo reminds us exactly why that's the case. Along with punk greats like OFF!, The Muffs are representing for the masters class and showing the young 'uns how it's done. Whoop Dee Doo will delight longtime fans. And if you missed out on The Muffs in their '90s heyday because you, uh, weren't born yet - this is as good of a place to start as any.