Another Album of the Year Contender... 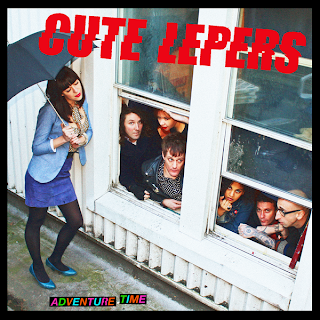 Believe it or not, this is the first time I’ve ever reviewed the Cute Lepers! I think the band had one 7” out at the time I put Now Wave to bed, and in the ensuing years they’ve done at least another six EPs and three full-length albums. That tells you how long I was out of the game! But it’s never too late to start championing a great band, and latest LP Adventure Time easily makes my album of the year short-list (current tour mates Something Fierce still lead that field, by the way!). Call me nuts, but I think I might like the Cute Lepers just a little bit more than The Briefs. It’s really close. Both of Steve E.’s bands faithfully cling to an unrepentant ’77 pogo punk M.O., but with the Cute Lepers the added new wave/power pop angle really suits my personal tastes. If you’re like me and treasure your Rezillos, Vapors, and Elvis Costello records just as much as your Gen X and Buzzcocks titles, this is an album you are sure to dig. I’ve read multiple reviews of Adventure Time that find fault with its lack of an “edge”, and that just makes me chuckle. This isn’t supposed to be a hardcore record. It’s the Cute Lepers, man! It’s supposed to be poppy! And it sure as hell isn’t supposed to be original! What it is, though, is high quality and infectious fun from the get-go. Put this album on, and you just have to smile (and jump around, too!). Steve E. and co. may be punk rock classicists, but they are not pale imitators. If they stick to the tried-and-true, it’s because they’re really freaking good at it! Catchy, up-tempo songs prevail a la the band’s previous two albums, so you might find this all a pointless re-hash if you’re the type of person who minds, uh, “stylistic stagnation”. But this is my blog – we celebrate stylistic stagnation! As far as I’m concerned, the Cute Lepers can make ten more albums just like this one if they continue to write songs this good. I dare you to deny that “All This Attention Is Killing Me” would fit in perfectly on any compilation of classic ’77 punk songs! And it’s not like there’s been zero progression from the last record. Saxophone and piano effectively add new wrinkles on nifty album opener “Tribute to Charlie”, and the infusion of girl group harmonies hits a high note on tracks like “Head Over Heels” and “She Liked Helter Skelter”. Adventure Time is pretty much an instant pogo party. There surely are individuals who question why such a thing should exist in the year 2011. Those people, thank God, do not read this blog.
- L.R.
http://www.reverbnation.com/thecutelepers
Posted by Lord Rutledge at 2:46 PM

This write up could be a first draft of an un named movements manifesto Josh. Take it the rest of the way bruddy... I got yet back.

I've been pretty much writing this same manifesto for 17 years. The official, titled version will be published on a hand-written scroll and accompanied by a soundtrack CD. Wal-Mart has already refused to carry it.

Just remember, after its written THEN, if its real good everyone will talk about how stupid you and what you written are.

Just ask all those fine gents at TERMINAL BOREDOM about The Neoteric Punk/Wave Manifesto... THAT was so dangerous they actually took time from their busy schedules of reviewing the same record over and over and kissing asses to DEBUNK me, my writing and everything i did on Joe Domino's BLANK GENERATION.

The Neoteric Punk/Wave was THAT dangerous... Totally vindicated me and my place with what I think...

So manifesto away Josh. Gimmie that scroll!